It took me so long to write a post about my trip to Chuncheon. Today, I suddenly miss my Chuncheon trip so much. I have been to many places during my winter vacation but I especially miss Chuncheon trip. Special thank to my friends who guided and recommended so many good places to us. Because of them, this trip became an amazing and unforgettable trip.

Let me briefly introduce Chuncheon. It is a small city in Gangwon province and it’s close to Seoul. It has a connected subway line / KTX / ITX from Seoul. It takes about an hour and a half by subway from Seoul. It’s at the north part of South Korea. It’s also close to North Korea. The weather was really cold compared to Seoul and other regions in Korea because it’s close to the mountains. There are so many places to visit there especially natural places such as Seoraksan, Nami Island, and so on.

I spent 3 days and 3 nights there. I took a bus from Busan to Seoul then took a subway from Seoul to Chuncheon. Along the way, we visited Nami Island, one of the most popular visited place in Korea. The reason that this place is popular is that of a famous Korean drama called “Winter Sonata” was filmed there. Anyway, it is not really a good idea to visit there during winter because the trees were not green nor orange like in Autumn or Summer. However, I had a good time there with my friends. 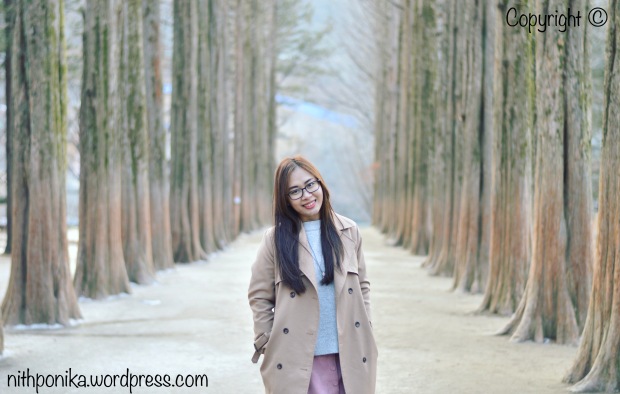 After Nami Island, we went to have dinner at a small local restaurant. The signature food of Chuncheon is Dak-kalbi (닭갈비). I don’t know how to describe how much I love it. Its taste was really different from other Dak-kalbi I have ever tried. It was so good. So yum! After having a great dinner, we also got ice cream for free. We did enjoy eating ice cream despite the weather was below 0-degree Celsius. During that night, we played a drinking game using the card. Then at 12 am, we went to Noraebang nearby and enjoyed singing until 2 am. I love that Noraebang too. You know why? I got 100 scores for all the songs. I don’t know why too. 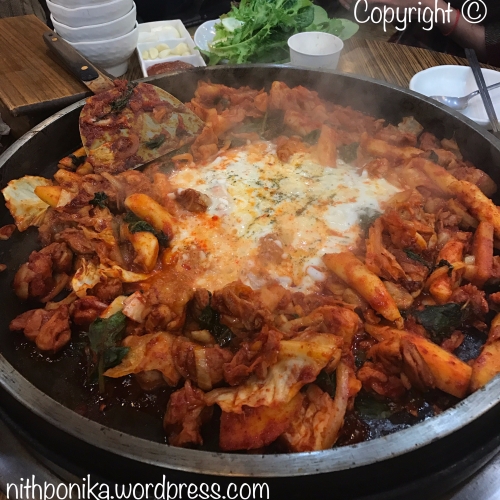 In the next morning, we went to Gangchon Ski Resort. It was our first time to try ice skiing. It was the best experience ever. I hurt myself a lot but it does worth it. At last, I know how to ski and I was able to go down the slope (the basic one) without falling down for few times. Hehe… 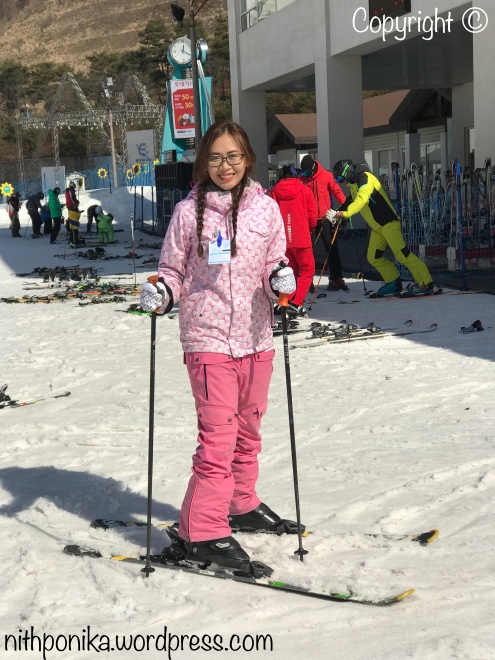 After ice skiing, we went to the Garden of Morning Calm, the lighting flower garden. It was like a magical fantasy place. I felt like I was like a drama once I get there. It was more than just beautiful. Despite the weather was really cold, we enjoyed walking and taking many photos there. They also played sentiment instrumental everywhere in the garden. It is the best place to visit for couples.

The Garden of Morning Calm | 아침고요수목원 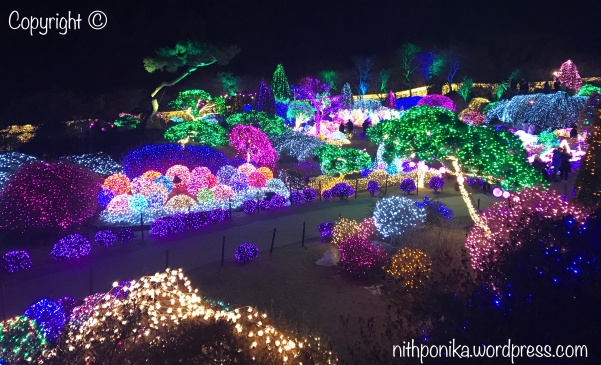 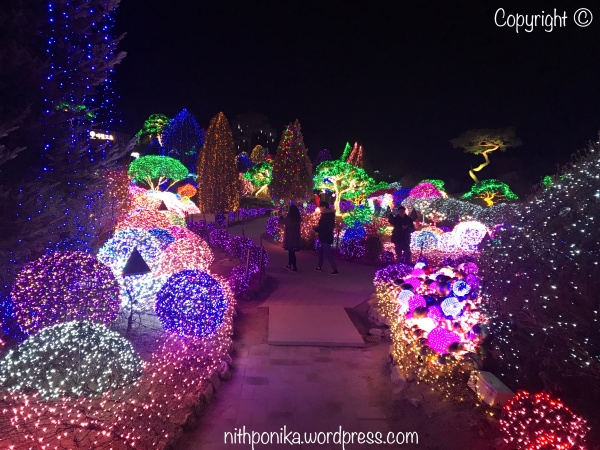 In the 3rd morning, we went to Railbike Resort. We enjoyed riding rail bike under the snow. It was the most unforgettable moment. It was like another magical moment for me. The view was really incredibly beautiful. We pedaled through the mountain and tunnels. Some tunnels have music and lightings. We could enjoy various things while pedaling the rail bike.

After that, we went to Le Petite France, a French cultural village in Korea. It was another popular place because of Korean drama “My Love from Another Star” and “Secret Garden” was filmed there. It was a small village with France style decoration. It was specifically about Le Petite Prince (The Little Prince). Since it was one of my favorite childhood books, I was glad to visit there. It has a gallery, museum, and various things of The Little Prince. They also have the puppet show in the evening. Due to the snow still keep falling and it was also raining so we could not stay there for long. Still, we did love the view there. We took so many beautiful photos. 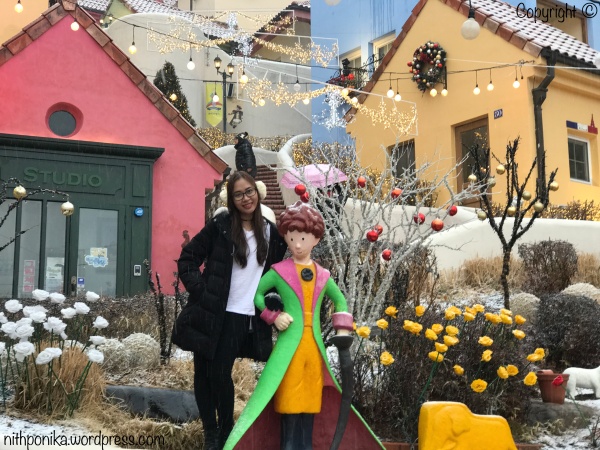 Some of my friends went back to Seoul after leaving from Le Petite France but I and other friends stayed in Chuncheon for another night because there was no bus to Busan in the evening. I was so happy to spend another night there. I just felt like I don’t want to leave yet. In that evening, we enjoyed having Gamja-tang (감자탕). It was the best meal during cold weather. We had so much fun during that time. We were talking about life and many things more. We left there in the morning and went back to where we belong. Some went back to Seoul and some went back to Busan. 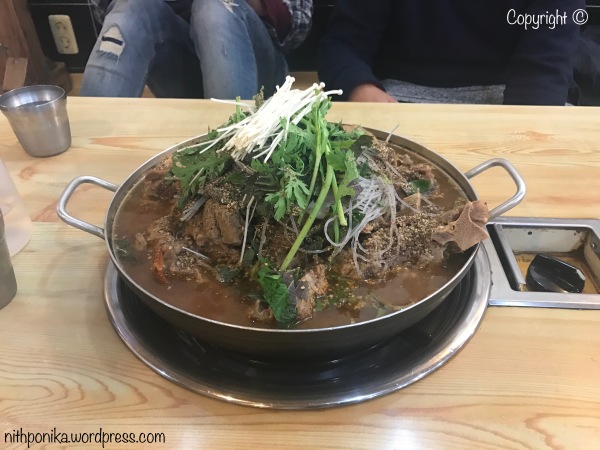 It was my last trip in winter vacation and it was an unforgettable trip. I love everything in Chuncheon. I felt so fresh, relax, peaceful, and calm. Foods there were so amazing! All of the foods were so delicious and uniquely different from anywhere else. People there were also nice. All the taxi drivers, restaurant owners, and elder people we met there were friendly and kind.

Chuncheon is a small city yet it contains many wonderful things. If you love nature, Chuncheon is the best place for you to visit. You will suddenly feel connect to nature once you arrive there. It was a great escape place from all the stressfulness and other problems.

If I have a chance, I would definitely visit there again. I guess I will definitely go there again because I haven’t visited Seoraksan yet. It was raining on that day that’s why we canceled Seokraksan plan.