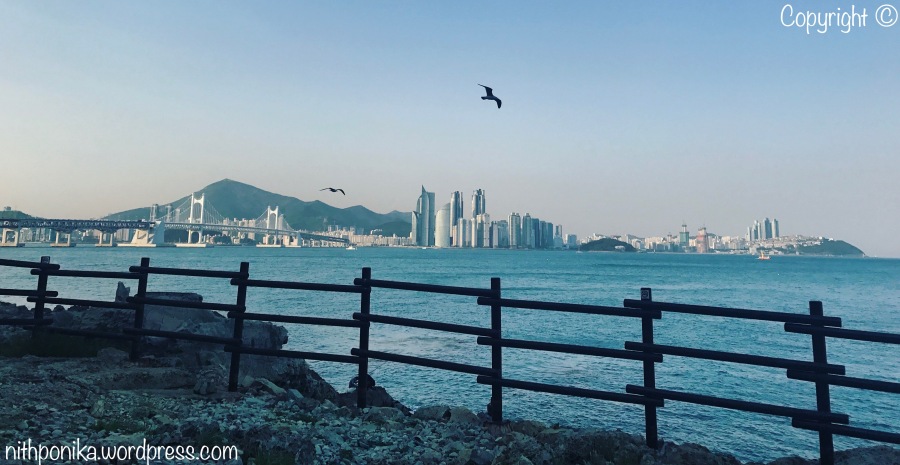 It was just like last week but it is almost time for me to say goodbye to Busan. By just a blink of an eye, it has been almost a year already. It will be marked as one year in August. However, it is a bit early for me to say goodbye to Busan for now but I will be moving to Seoul later next month so I will be busy with moving and settling down in a new place. I will be leaving Busan earlier than others because I have already found a place to stay in Seoul. I will not live in a dorm anymore. I will rent one room to stay for 2 years in Seoul.

In the first year, I have to take Korean language and culture program. It is also a year of joys, fun, adventures, experiences, life-changing year. I have become a completely new person from the perspective of thought to appearance.  Let me list down what I have done and experienced within this year.

This is a primary purpose living in Busan for this first year. I am so fortunate to study the Korean language at Dongseo University. Currently, it is the top university of Korean language for KGSP program. It has the highest percentage of students who passed TOPIK. I gotta admit that it was hard at first because when I first started the semester, I had so many extra class and homework to do. As the result, I got TOPIK level 3 in March test which is about 5 months after I started Korean class. Then I got TOPIK level 4 in April test. I will have another TOPIK test in July which is going to the last test for me. I don’t think I can get TOPIK level 5. Obtaining TOPIK level 4 is enough for me. Yet, I am still not confident enough to write an article in Korean. In the first semester, I barely understood what my Korean teacher said. It was hard to communicate with Korean people. I couldn’t even order a coffee. However, in the second semester, everything has changed. I was suddenly able to communicate with Korean people and understand everything my teacher said. I can also watch Korean drama without subtitles.

Within this first year, I am fortunate to meet so many wonderful people from all around the world. I cannot count how many nationalities I have met. This is an incredible experience. Thanks to NIIED for giving me an opportunity not only to obtain an academic degree but also a strong bond friendship with people from the other side of where I am from. Making friend with people who have the different culture and speak the different language does teach me a lot. I am able to learn about the culture difference, the different lifestyle between mine and theirs, learn to accept the differences, learn the amazing things about their country, taste different delicious dishes. It also teaches me that no matter how different our cultures, language, and foods are, we are still human, we speak the same mind language and feel the same things, we love the same things and aim the same goal. Moreover, English has become the first language that I am using following by Korean while my own language has become the third one because I only use when I communicate with my friends and family through social networks.

Among all, traveling is the most significant thing I have experienced within this first year. I have mentioned very often about how I much love traveling. Besides learning Korean language, traveling is my second primary purpose within this first year. My friends who came here before me told me that I should spend my first year on traveling because once I start my graduate class, I will not have much time to travel. So yes, I think I have spent my time much enough on traveling. Within this first year, I have been to 11 regions including cities and provinces in Korea such as Jeju Island, Chuncheon, Pohang, Gyeongju, Geoje Island, and so on. My goal is to travel to everywhere in Korea. Many places on my bucket list have been ticked and more are on the way. However, besides traveling in Korea, I will also travel outside Korea. There are many countries that I have been wanting to visit. I will my dream come true no matter how long will it takes. By the way, I will be going to Taiwan during this summer vacation. I can’t wait to try all Taiwan street foods and Chinese foods. I have been longing for Chinese for a long time. It’s going to be my food trip because my main purpose is food. Hehe…

Another precious experience is living away from family. It has taught me so many valuable lessons. The differences of living with parents and living alone. How to handle the problems with other people as well as how to share personal space with other people. Another important thing is learning the differences among people. It is like a wide-opening experience for me. I have got a chance to know many people from many countries around the world. The knowledge from reading books, watching TV, searching the internet are not as worth as experience it by yourself. It like a Cambodian proverb saying that “Heard 100 times is not as worth as see 1 time.” I got a chance to learn about their cultures, languages, foods, the way they live, their people, their politics, and so on. Especially, I learn the difference in the way of thinking. They all have an incredibly unique way of thinking. That is why it is really important for me to learn how to accept the difference and to understand why it is different.

After one year in Korea, I get used to living in Korean society. I haven’t had culture shock or difficulty in living in Korea. My one and only difficulty back then was language. So after I am able to use the Korean language, my life has gotten easier. However, I cannot deny the challenge of using public transportations and map. Comparing to my country, Cambodia, Korea has so many availability public transportations. In Cambodia, people tend to use their own vehicles. The public bus has just started its operation but it hasn’t run well yet. Coming to Korea, I have to learn how to take a subway, public bus, and taxi. It sounds easy by just taking a subway but the challenge is when we have to transfer from one line to another. I needed to check a map and keep track with each station. Now that I get used to a subway in Busan, I will have another challenge once I move to Seoul because subway in Seoul is way more complicated than in Busan. No matter how many times, I have been to Seoul, I am still afraid that I would get on a wrong line. Besides that, I have also experienced a lot of things that Korean people normally do like going to the pub in the evening, the club at night, chicken and beer at weekend, drink soju, and so on.

I can never forget to mention about changing of appearance. What do I mean by that? Well… It is not about how beautiful I become but how I change the way I dress up. My friends in Cambodia said I have changed a lot. Of course, I have changed a lot. Back when I was in my country, I rarely do makeup. I just get dress up and go to work. One of the reasons is because of my working environment. Even though, when I hang out with my friends, I rarely put makeup on. However, since I came here, I cannot go out without makeup. More or least, I have to do makeup. It is just a common thing to do here. Also, due to the variety of cosmetics here, it is easy to buy cosmetics with cheap and good quality.  It is the same thing for clothes. I really enjoy observing how Korean women dress up. They have their own unique style. Although, there are so many trendy styles yet they know how to choose the outfit differently.